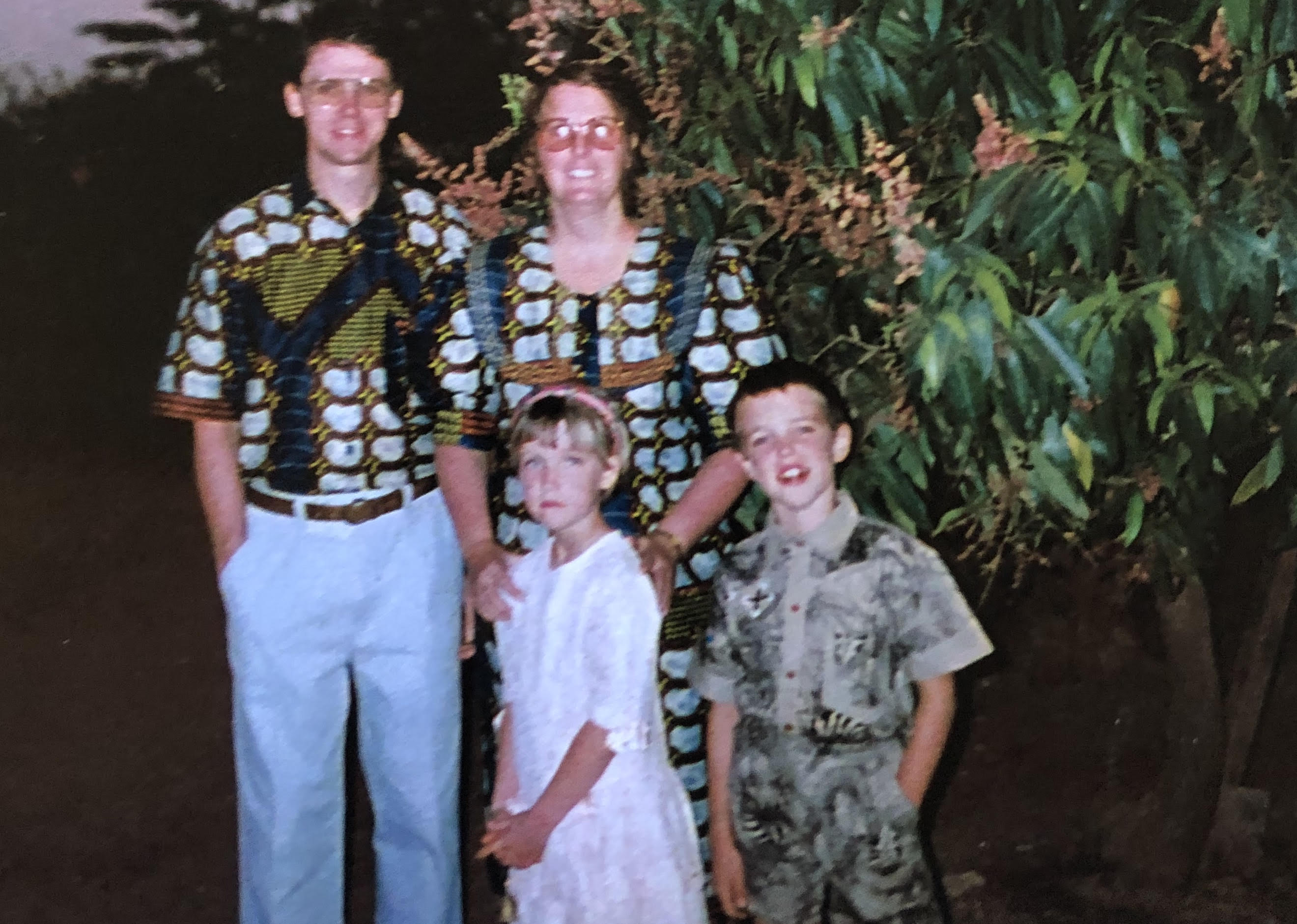 Bon jour d’Ouaga! We are beginning to speak some French and it is exciting. I can pretty much make myself understood so I’m not so afraid of venturing out. My French from college has started coming back to me so my listening and comprehension are pas mal (not bad). Knute has not had the 4 years of intensive French as I have but is able to get about. Last week he bought a mobylette (mo-ped).

We moved into our house a rather nice one with 3 bedrooms, one bath, dining, kitchen, living room, patio (covered) and nice large yard (for Ouaga). We even have some mango trees — however it’s not the season yet for mangoes. Its major drawback is that it is less than 1 block from the outdoor cinema which tends to show violent, sometimes gory flicks. Usually the screaming sounds comical but sometimes not, so we turn up our radio.

There is no grass to speak of here – all is red dirt. Everyone’s white tennis shoes soon become the standard orange-red of the dust. And dust covers everything. Even the bright blue blades of our oscillating fans are more orange than blue- I’m told it becomes impossible to deal with the dust in Jan. and Feb. when the dust storms come. it sounds interesting. No matter how well you shut up your house there’s thick layers of orange to be dealt with afterward.

Right now the weather has turned cooler, hovering more in the low 90’s during the hot part of the cay. Some of our instructors are starting to wear sweaters! We get up at 6 0’ciocK (with the sun) and it is so nice and pleasant till about 10 0’clock, and then doesn’t become nice till about 3:30 until 6 p.m. (when the sun sets). Everything here shuts down from noon to 3 p.m. and the language school students usually go home for a siesta ( unless you have kids in which case, one of you must stay up with them!) Language school goes from 8 a.m. to noon, and 3:30 to 5:00 p.m. I’m not yet used to going back again once I’ve been home!

Since language school IS essentially full-time for us, I have no time to homeschool and do my own homework. After much deliberation, we decided to put the kids in the American school here. They are happy for the diversion and are making some friends. We had two weeks of orientation before starting language instruction and life was pretty slow till then (Jonathan would say “boring”!) There are many families in our neighborhood who cannot afford to send their kids to school. It seems the kids’ lots in life to sit outside (too not Inside) on the street for hours ate time. Not a very stimulating environment to say the least.

The roads here are unpaved and unnamed for the most part. The main paved road is Charles De Gaulle but in our neighborhood, the main road is the bumpy, red dirt road. The kids like the dirt road better than Chas. de Gaulle because they can play “Hatari” and pretend they are catching wild animals for zoos like John Wayne did in the movie. It is difficult to tell people where you live when the streets have no names! So we tell taxi drivers we live near the Pharmacie Wend Kuuni, and walk home from there.

Oh, I forgot to mention that everyone’s animals live openly on the roads. This includes chickens, goats, and donkeys. Even the young kids defecate on the road so we always wear our shoes. Even inside the house, which seems disgusting to the Burkinabe (the “be” at the end is pronounced “bay”). So we have a rule in our house — if anything drops on the floor it must either be thrown away or sterilized. Washing dishes requires an extra step of rinsing in chlorinated water. To brush your teeth, you must first remember to get a glass of filtered water for rinsing your mouth and brush. And should you forget and rinse your brush with tap water, you must have your parents sterilize your toothbrush

Speaking of animals, we are now the proud owners of Irenie and Sir Gibbie (who are chickens). Sir Gibbie is a rooster which is thrilling for the kids but our American neighbors are wary. He hasn’t started to crow yet and Thanksgiving is next week if he does!

You all have voted by now. We went eagerly that following Friday to the American Center to watch the news to see what happened. As it turned out; that Friday was Nov. 11 Veteran’s Day. The Center was closed! However someone said that the Republicans captured both houses. Most of the people here are Democrats and very despondent. We would welcome newsclippings.

We have all remained fairly healthy. Knute had a 24-hour bug that made him feel weak and nauseated but he managed to make it to school. I have had a little intestinal flare up but it was pas de probleme as they say here (not a problem). The kids have done remarkably well. They acclimated almost immediately — in fact Jonathan even wore a jacket to school his morning (l still wear a sleeveless blouse at all times). The bugs are no problem for them. Actually Knute and I are not as grossed out as we might have been in the States. We have screens and mosquito nets. We’ve stopped bothering with sun screen and bug spray. We’re getting nicely tanned but not burned. And after the first week, we don’t seem to be getting bitten as much. Even Jonathan, who reacted big time to bug bites in the States has started tolerating them well. At any rate he does not complain and doesn’t seem bothered by them.

We are planning a big to-do next week for Thanksgiving. I asked Maurice, the language school director, if we could have Thursday off and he said if we invited him and the teachers (all Burkinabe), we could. So we took him up on it. It caught him by surprise but he agreed. So we’re going to all come over to our house, which is the biggest and roast 2 turkeys and a ham. If the instructors bring their spouses, we could end up with 30-35 people! Le plus grand fete! Our instructors are very interesting people. One man, Lassina, brought in photos of his mothers. That’s right, mothers! He is Muslim and his father had 3 wives. I had never encountered that before and was sorely put out that my French was too minimal to ask him much about it. Our cook, Inoussa, has 3 scars around his face that were given to him at birth to signify his tribal allegiance. Other facial scars are common. I understand that one of our instructors is female-circumcised. All this is future conversation stuff once we get a bit further along. Wow, talk about culture shock. Actually alt this is fascinating for me and I can’t wait to talk in French about it.

What is most frustrating for me is how much effort it takes to buy simple things. Go here for bread, they’re out. No one has black pepper. 5 trips to get what we used to get at the 7-11 down the street. And that is not counting big items like meat. We don’t have a phone so we must walk a block to telephone for a taxi. On day I went to telephone but the house with the phone was locked. I was so frustrated I wanted to scream but the Lord provided a taxi just happening by and I was able to hail him.

Prayer requests: answers first—Jonathan has started sleeping through the night. He at first was disturbed by all the strange noises. And we feel comfortable with the schooling arrangements. But we need your prayers for continued good health and also about our response to the needs of the poor people around. They see us as walking banks (which in reality, we are) and either here to give hand-outs or maybe to exploit them. These are extremes, mind you, but I still grapple with it.

Meanwhile we have hired a young gal who washes our clothes and does a little housecleaning and taking care of the kids after school. Sometimes I feel guilty using help but it does enable us to get other work done. Most everyday housework is very labor intensive.

But I know you’ll appreciate this, Anne. I am able to get cokes just down the street. A little bit of home. That plus the man who makes pizzas for the nasaras (that’s the local dialect work for white people) and the swimming pool. Plus there is an English- speaking Bible Study Sunday evenings. Church is in French and thus not fully uplifting as it probably will be in a month or so. We go to a CMA church but might try out the Assembly Church down the road. The CMA church has the advantage of having the French sermon translated into Morey, the local dialect. That gives you a pause after each sentence to figure it out.

I might throw in Christmas greetings now. I understand that the post office here is mainly staffed by Muslims and many feel they show their disdain to Christians particularly during Christmas.